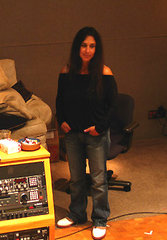 Cookie Marenco is known as a woman who does things her way. With 20 plus years in the music industry and a handful of Grammy Nominations, Gold Records and an Academy Award, this innovative producer/engineer/entrepreneur is a stickler for quality. We caught up with her at her home base, OTR Studios in Northern California, for a chat about her latest projects and favorite gear.

NHT: So what have you been working on?

CM: Let’s see, I'm always involved with running Blue Coast Records (www.bluecoastrecords.com). It’s an audiophile label we started about 3 years ago using a proprietary recording technique developed for surround and modified for stereo we call Extended Sound Environment, or E.S.E. It offers incredible holographic sound and caters to musicians who are also great performers. While we’re waiting for our solo piano recording with Art Lande to be ready on SACD, we’ve just begun releasing CD quality (.wav) downloads at the website. So far, it’s been very successful for us, and we've had a huge following in France where my co-producer Jean Claude Reynaud is from. In the studio (otrstudios.com), we've had an incredibly wonderful soundtrack project with Abi Roberts, who is often called the Bette Midler of London. The soundtrack is for the movie, 'Beached', is a spoof of Bette Midler's movie, Beaches, now celebrating it's 20th anniversary. At the end of July, I'm headed to Nashville to record Rob Ickes, dobroist extraordinaire (and a Blue Coast artist) in a project with piano and vocals.

NHT: I know you’re quite the 'purist' for great sound. What is the recording setup in your studio?

CM: The core of the studio is probably the 2" machine, an Otari MTR 90, which I've had since it was new in 1987. It still sounds incredible and we have it interfaced with a Tascam MX2424, the Sonoma DSD one bit recording system, Samplitude, Nuendo and Wavelab depending on the session. We’re doing a lot of archival work, of course, and everyone seems excited to record to tape. If we need, we’ll drop it to digital after the recording. All our young engineers and interns out of recording school want to learn about tape. They hear the difference right away and love the experience of sessions on tape. We have the requisite ProTools, which is the only digital system I personally operate. My core recording gear includes vintage mics, Neumann, B&K, AKG and stock Shure mics, etc, Millennia preamps, four Millennia Origins, lots of vintage Lexicon verbs and delays, AMS reverb, Neve pre's, Universal Audio compressors, a Manley Voxbox and way too much other gear. My mixing console is a 48 channel Soundworkshop board once owned by Pat Gleeson (of Headhunter’s fame). Our biggest enhancement was developing our proprietary silver cable, which has replaced most of our mic cabling. It was developed for the French Aerospace industry and has an amazing RF rejection ability. With cell phones and other noises proliferating, we’ve managed to bring down the noise floor while increasing the high and low frequency response. We’ve built a few cables for bass players who say the cable ‘speeds’ up their playing. I remember the day I had my NHT M-00's hooked up with Mogami and swapped out with our 60 foot silver cable. The M-00's were smoking HOT! 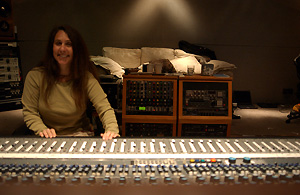 CM: No, I prefer mixing "OUT" of the box, the old fashion way. I ripped out my automation too! Mostly I record musicians and I've found that the better the headphone mix, the better the dynamics and the better the sound. Mixing is pretty effortless when you start with clean tracks performed with everyone on the same dynamic page. Headphone mix is key to a great sound and great performances. I like to joke that I charge extra if I have to move a fader. It’s taken me 20 years to learn to do nothing in a mix except listen.

NHT: What NHT models do you use?

CM: I use the M-00's, the M-60Xd's and the home version of the Xd system with the XdW sub. The M60's sit on my console all the time and have become my favorite near field monitors. My mixes are accurate so that when I go to my other audiophile speakers, everything sounds right. Sometimes I have the M60's running in parallel with a set of Annoy Little Reds. I love running 2 pair of speakers to mix. It’s a way of listening that is less fatiguing over the course of a long day. I use the M-00's in small rooms or when I travel. They're rugged and have a nice clarity, which is perfect when space is limited. I use the (home) Xu’s in my living room, and it makes listening to music a really pleasant experience. The stereo spread on those really seems to jump beyond the speakers.

NHT: You mentioned that you take your M-00’s with you to other rooms, why is that?

CM: For the price, convenience and ease. I simply haven't found any better.

NHT: What differentiates the NHT monitors from others you've mixed on?

CM: The shape of the M60's are a wedge which I think works incredibly well in a small control room, and for near field. Someone at NHT designed a brilliant way of having clarity with 'responsible' bottom and top end when the speakers are 2-4 feet from your ears. I've been incredibly successful mixing in small rooms with these. It's been the best translation of my mixes to date.

CM: I haven't yet, but I'm working on a small remote system and hope to bring surround wherever I go!

NHT: How did you learn about NHT’s?

CM: I met John Johnsen at an AES Show – maybe back in 2004. I gave him a 5-song demo of the Blue Coast Recording. He called and said NHT won the G4 Tech TV Ultimate Audio Award at CES in 2005 using our disc to demo with. From there, we worked on a co-branded release using our Blue Coast recordings. It was an incredible honor that helped launch Blue Coast Records. It's obvious the folks at NHT love music and sound. And they’re musicians. They're making incredible gear, worthy of audiophile listening, yet affordable to the masses. Visit http://www.cookiemarenco.com/ for more info.